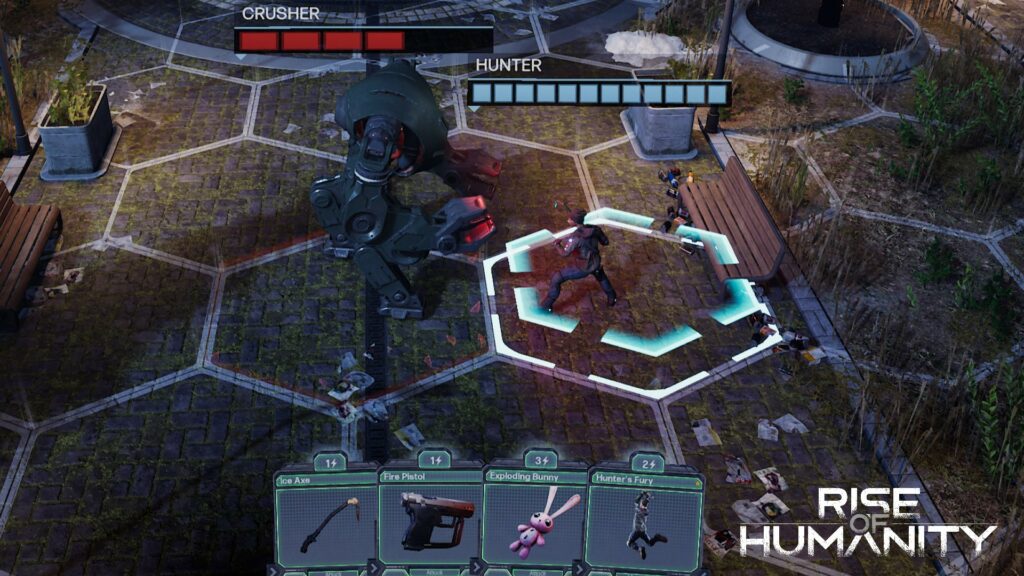 Recently we released both a demo and a prologue for our game Rise of Humanity, we would like to share with you some of the reasoning behind this decision and some of the results.

Let us start with a small introduction to Rise of Humanity. It is a combination between a deck building game and turn based strategy game. Think of it as XCOM meets Slay the Spire. Except for movement, players use cards to give actions to characters they control.

Having the possibility to take part in the 2021 June Steam Next Festival we knew we needed a demo of our upcoming game Rise of Humanity. Luckily, we already worked hard on a prologue version of the game so, our initial though was to modify that version slightly (basically text that says prologue would become demo) and release both at the exact same time. Reason for doing either was to drive wishlists and get more eyeballs on our main game and that puts us in a perfect position to compare both over a one week period.

However, because we had problems with our saving and loading system and the games localization, we had to change our plans. We ended up releasing the demo only in English during the Steam Next Festival and then a week later we released the prologue with the missing features included. The good thing about doing it this way was that it also helped us look at demo feedback and make a few small adjustments to the prologue improving the game.

The demo ran from the 16th till the 22nd of June and we will be comparing that to the performance of prologue running the week after. Enough talk let’s look at some numbers.

Here are the units for the demo during the games festival:

As you can see, we had 1317 units of our demo during the event. From what we are aware of this is from people clicking to get the game, which does not mean they downloaded or played it.

Now let us look how the demo affected the main games wishlist during the Steam Next Festival:

The spike comes from the live stream we did that was featured on the event page.

Now let us look at the prologue released one week later. A side note here is that we released the prologue when the Steam Summer Sale started this for sure has not helped with visibility. We were aware of the summer sale but giving the entire timeline and release of the early access version of our main game we still figured this the best time to release.

Here are the total units of the prologue during its first week:

The data of the previous 7 days you see mentioned are keys we provided to press and influencers. As you can see the prologue has a lot more units. However, because the prologue is a separate product with its own appid we also have data on first time downloads:

Here is how it affected the main game’s wishlists:

As you can see conversion is a lot smaller. There are some side notes though, the prologue will stay on steam for longer and is also in the new and trending of the free games category, this helps with more visibility. We are still in the Steam Summer Sale and this means the page is a bit more hidden.

Here are the conclusions we made from all of this:

We hope this article helps in your decision to join a steam festival or create a prologue for your game.

And while you are working towards your prologue or demo, why not try ours?