On Thursday 23 April, we organized our first AMA about Rise of Humanity. Over the course of one hour, we answered all questions about the game. We have collected all these questions and answers from our Discord AMA here.

Wishlist Rise of Humanity on Steam

Q: What were some other games/references that inspired you to create Rise of Humanity?

A: Xcom 2, Slay the Spire and any other turn-based tactical game or deckbuilder.

Q: Is there a bunny plush available for pre-order?

A: Yes there is a plush bunny available. Just not publicly at this time.

Q: Are there any other turn-based tactical deckbuilders?

A: I am pretty sure we are the first. Many people have a wrong impresion of a deckbuilder. Let me explain the difference between a deckbuilder and a CCG or TCG.

Deckbuilder actually comes from the board game world, Dominion (https://www.riograndegames.com/Game/278-Dominion) is the game that started it. A deckbuilder to me is where you build your game while playing, where in a TCG or CCG, you need to collect cards first and then make a deck. In PC games they use the term deckbuilder in a wrong manner way to often.

Q: Will RoH have voice acting?

A: Yes, it will have voice acting, but it is not implemented yet

Q: What sort of narrative are you including with RoH?

A: The narrative is going to be limited, however we are in the process of hiring a story writer to flesh out the backgrounds some more.

Q: Are you able to share any details about the story of RoH?

A: In brief: Almost all humans dead, AI caused it, something is happening so now they can fight back.

Q: Why are the bunnies so explosive?

A: In our game though your heroes have taken refuge in an old theme park. They have come across a huge amount of fluffy bunnies and like all good survivors would, filled them with explosives.

Q: Where about are you guys looking to price the game?

Q: Have you considered showing enemy intent like Slay the Spire?

A: No. It’s a different style of game. In Slay the spire the enemies don’t use cards. They have a rules approach. In our game they have their own decks just like the players and so we have an AI that is playing all the cards.

Q: In that case, do 2 of the same enemies have the same decks?

A: At this time in the demos, yes, but when the game is fully developed and released in the future, no.

Q: How is order of playing defined? Is it like random as we see in Divinity Original Sin, or is it turn based like Xcom?

A: It is turn-based. every card has an initiative value. we add up all values, divide by the amount of cards in our deck and that defines order. 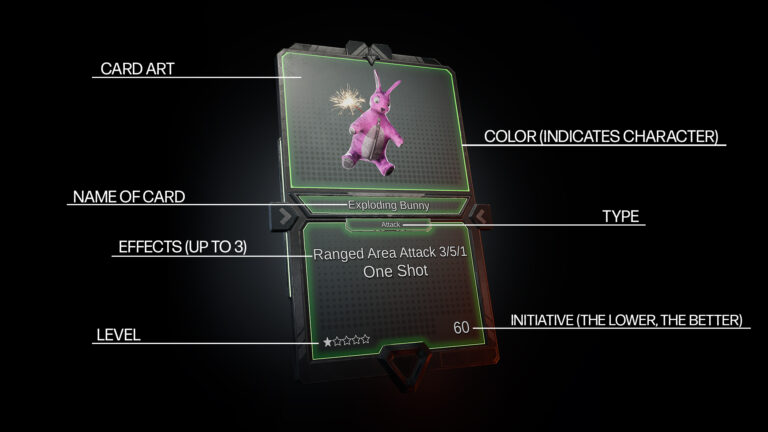 Q: Can we compose our own decks at HQ?

A: Not compose but you can merge and upgrade cards. You upgrade, buy and combine cards with blueprints. Again, it is not a CCG or TCG but a deckbuilder, cards are mostly gained during play. Each character you play has its own deck.

Q: But if I collected like 50 cards over some missions, I reckon I don’t go with 50 cards in a mission?

A: The way you would prevent that is by upgrading your cards by combining 2 of the same cards together. Or you would have blueprints to cards to create new ones. So the cards that you find in game are basically a resource you use to upgrade your initial deck.

Q: Is there other loot than cards?

A: There is actually. Next to cards, there are blueprints to create new cards and skill points to upgrade your characters.

A: We plan for multiplayer but not at the start.

A: So, the current idea is this: Everyone starts with a choice of 3 characters with basic decks. These  are the 10 card starter decks you normally start with. Then you play someone and if you win, you keep the cards you looted and next round you play someone who also won and looted cards in his previous battle. That way we keep everyone somewhat equal.

Q: Do you have a preferred class to start out with, or do you always go in with a mix?

A: The Hunter will be the character you start with in the campaign. However we will have a daily mission, where we each day will give you 3 random characters. Daily missions will have daily rankings as well.